“Unfortunately, I can’t refine this into my physique.” Yan Zaizen commented. He knew that after his cultivation pa.s.sed the refining regalia stage, it’ll be impossible to do so again. His physique was finalized.

“Not necessarily,” Pinaka interjected. The unique characteristics of the Heavenly Law of Mimicry had high adaptability. It’s possible it could be refined even after, or even if he used it just to strengthen his bloodline via refinement and gain comprehension of the Law of Mimicry, it would be worth it.

Yan Zaizen felt her thoughts from those words and looked at the white orb that seemed to contain nothing yet everything. Unlike regalia, bloodlines did not allow someone to gain a comprehension into a conceptual law. They only allow the execution of the core law with their energy.

Thus, even to this day, Yan Zaizen has gained no insight into the Heavenly Law of Mimicry. A huge reason for this had to do with the lack of concept provided in the bloodline. Yan Zaizen felt he understood time for quite some while, but only after comprehending his own concept could he appropriately use it.

Without establis.h.i.+ng a connection with the heavenly law, you can not use said heavenly law. That being said, you can develop multiple concepts into the same law, it all relies on your abilities.

“I’ll consider more on this later.” Keeping the regalia of mimicry, Yan Zaizen exited the spatial void. He appeared outside a golden palace that seemed to have originated from the world of immortals. “Quite a place,” he commented carelessly.

“Indeed, it is.” A voice resounded. A middle-aged man arrived with eyes of pure brown without a hint of pupils within. This sight was Yan Zaizen’s first. However, from the man’s aura, he immediately realized he was a Divine Beast in human form.

“You can call me Eke, it’s a pleasure to meet you Lord Yan Zaizen.” Eke — a rank two Divine beast — bowed in courtesy. His manners and actions were profoundly polished, allowing Yan Zaizen to realize that beasts weren’t so different from humans.

He then recalled an interesting bit of information. It seemed that beasts and humans t.i.tles weren’t regarded by their race. This was a designation done for countless years ago and was still regarded today for simplicity sake. However, beasts and humans have long since intermixed their bloodline. Even he had a beast bloodline within him. However, it was dormant.

A majority of his dominate ident.i.ty, including his bloodline, was human-like. Therefore, he could only appropriately walk the human path. In truth, body cultivation was an exclusively beast path, soul cultivation originated from races who belonged to h.e.l.l, and qi cultivation was universal. The intermixing of races over the countless years have enabled essentially 99.9% of the population in the myriad realms to choose any path.

However, there was still the path most suitable for you. For example, this Eke was rank two Divine Beast. He refined his body with his origin source to reach this level and then strengthened it to this point. While the Essence Path refines origin source into cores, the b.e.a.s.t.i.a.l Path refines it into their physical bodies, each rank is determined by how much they’ve refined their body and bloodline.

“Please, follow me.” Eke politely said, gesturing for Yan Zaizen to come along. Yan Zaizen followed. After all, Eke was equivalent to a first-floor Heavenly Genesis Expert, of course he wouldn’t be defiant with this extraordinary reception.

They entered the palace, bypa.s.sing many guards and servers flying about at a rapid pace. Some were even panicked but kept working. “The banquet is quite busy, I hope you won’t mind.” Eke said.

Shaking his head signaling his lack of care, he continued onwards with an intrigued gaze. It was only when he arrived at the main hall within the palace that he was shocked. If the hall could be described in a short phrase, to Yan Zaizen it’d be: “Stupid Rich!”

The materials that were the walls, floors, ceiling, pillars, tables, even the plates were constructed from high-grade essence crystals, and the food each seemed to contain faint heavenly aura that seemed prepared so meticulously that, if obtained by anyone waiting outside, their cultivation base will make a breakthrough with a single bite.

The entire atmosphere was suffused with a mouth-watering smell of wine and meat. Having been in secluded cultivation for nearly fifteen hundred years, Yan Zaizen smacked his lips like a b.u.m at an all-you-can-eat buffet. Not the standard food chain. The high-quality, hundred or two for entry locations filled with all sorts of extraordinary delicacies.

He spotted white cake that seemed too moist and delicious that his mind went blank at the sight of it. Before he knew it, he ignored Eke’s urging to meet certain people and arrived before the table. Everyone was standing about with wine and plates floating around them with their various powers. Therefore, the table had no one surrounding it.

A fork, his personal cake eating fork, magically appeared in his hand and he proceeded to enjoy. A single bite and he felt like he was in the clouds. It had the part amount of softness, sweet taste, and sublime texture. It went into his stomach where it was devoured by the samsara-based vital energy within. As it did, it was like it was eaten and enjoyed a thousand times in the countless reincarnation cycle.

Yan Zaizen’s handsome face was filled with intoxication. He ignored the fact that everyone, EVERYONE, was looking at him with rapt attention. Either directly or his senses. It wasn’t long before he tried the wine, a drumstick of meat, and more cake. His expression grew increasingly gluttonous. Yet, he hadn’t even touched 0.01% of the total food here.

“Is this all free?” Yan Zaizen directly interrupted, taking another bite with a sparkling gaze. Eke was shocked, but he nodded.

“Yes.” Eke responded again almost as if it was an automated response.

“Great,” he looked at all the various cakes, meats, dishes of fruit and wine that seemed to be plainly spread out for thousands of meters, “Mine.” With a wave of his hand, everything was directly stored within his Meteor Ring. From the wine to every last piece of cake. 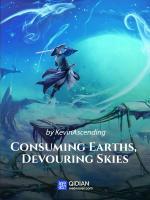 In the myriad realms, legends rise and fall in the countless eras.Yan Zaizen, a frail youth with an unfortunate history, meets one of these legends. Will this change his common destiny to something greater? The story of a boy that just wants a peacefully lavish life with money, amazing food, and a beautiful woman to love.The story of the heavens that laughs at this.

Journey To Become A True God
9

Journey To Become A True God